A Rockin` Odyssey through six shades of Blue!

“A truly gifted and multi-talented guitar player, singer and writer with a combination of both Greek and American musical cultures, who can project some of the most exciting electric, bottleneck, slide guitar runs, and straight-ahead, solo, down-home acoustic blues. He’s one hell of a player who will continue to carry the torch and keep the blues alive well into the 21st century. His recording work, both in Greek and English, with original songwriting skills, will delight listeners on both sides of the globe.” –Bill Nolan, WPKN-FM, Bridgeport, CT

“Soukis’s amazing guitar playing sent shivers down your spine placing him out there among the best.” –George Zaxaropoulos, Metal Hammer

“Spiros, with his New York-Greek accent, has a true voice of his own. Soukis Blues is some good old rockin’ blues with powerful guitar in the style of early Eric Clapton; earthy vocals with their spice of the Greek isles, in combination with his strong guitar action–the show was delightful.” –Tony Falco, Falcon Music & Art Productions, Inc.

The music is blues-rock oriented, with funky grooves and the freshness of Mediterranean breezes.

"Crazy About the Blues!"

Growing up in Athens, Greece I spent all of my free time trying to find, buy, listen to and study every blues record I could get my hands on at the US/UK-import record stores. And I was also hearing people like Howlin' Wolf on the American radio broadcasts from the then-existing US military base in Athens.

Although the British blues-guitar masters like Peter Green, Eric Clapton and Robin Trower were my first huge influences, the impact on my style from American slingers like Johnny Winter, Harvey Mandel, Duane Allman and, of course, Jimi Hendrix was equally important.

In the late '80s I moved back to Athens, where I formed a powerful blues-rock trio, 'That's Why,' opened for bands as diverse as the Pixies and Peter Green himself and recorded two songs for the Live at Rodon album. My first self-produced CD "Fota Tou Iliggou" (Lights of Vertigo), was released in July 1996 and received overwhelmingly positive reviews from the critics who gave it the highest points of reference. Including "CD of the Month" in Audio (July, 1996).

Between 1996 and 2000 I recorded several songs and in 2000 my Greek record label re-released my CD in a re-mastered, repackaged and re-titled version "I Magissa Tis Arapias" (The Sorceress of Arabia). The title track is a popular Hellenic tune from the that is a mixture of minor blues blended with rembeticko--the Greek blues--for which I created a new arrangement.

When the year 2003 was declared by the American Congress to be "Year of the Blues," I took this to be an excellent sign I should pack up my guitar and head for the motherland of the blues: America! To be specific: New York City. Where I immediately started going to the jams, meeting musicians and making new friends who, like me, had come to the city from places all over the world. Manhattan is a musical mecca and I was blown away by the abundance of musical talent the city had to offer.

Last summer I started to play at some clubs in and around New York. And over the course of various gigs I was able to play with a wide variety of different players some of whom I really clicked with. That's when I decided it was time to go into the recording studio and begin to record my newest songs with--for the first time--English lyrics.

Now I've just completed my first all-American recording with eight news songs for which I've written all the music and lyrics and recorded in NYC and Athens. Performing with me are some amazing musicians: Ms. Bernice "Boom Boom" Brooks, diva of drums, Mr. Ivan "Funkboy" Bodly, bassist extraordinaire, Mr. Jeff "Breathtaker" Stewart, harmonica king and yours truly on guitar and vocals.

The music is the blues played with Greek soul, spiced up with a funky groove and with a rock intensity that brings to my beloved American roots a European touch. And the soft freshness of a Mediterranean breeze. Pump up the volume and enjoy! 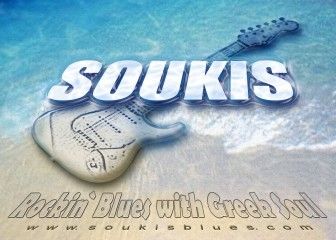